ER BFF sent me this the other day: 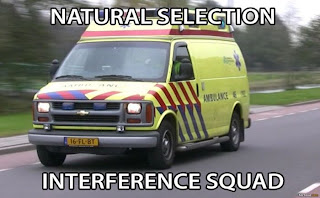 And all I have to say is YUP. Working at a trauma center has really opened my eyes to the depths of stupidity to which the human race is capable of going.  I really thought I had seen it all working at Hood Hospital, what with some of the insane complaints people used to check in with, but obviously I wasn't anticipating taking care of those same people on Friday night, after they'd been at the club and had a beer or six and ended up in some kind of unfortunate situation requiring trauma services.
I still don't agree with it, but it almost makes me understand the attitudes people up here have a little bit better.  There's about an equal amount of stupidity, but since alcohol seems to be involved more often here, it's kind of like a more aggressive variety of stupidity with less of the redeeming human element. Although the worst cases aren't the ones with people operating automobiles/motorcycles/bikes/motorized wheelchairs/whatever under the influence of some unadvisable substance, which could be somewhat attributed to impaired judgement related to said substances.  Nope, I'm talking pure, organic, unaltered poor decision making skills and what we in the medical community refer to as being really, really dumb.
For example, I took care of a guy a couple weeks ago who wrecked his car into a stationary object, and like so many others before him, came to the ER back boarded, c-collared and acting a complete fool.  Just by the nature of the accident, we all assumed he was on something to be acting this way and to, you know, have a collision with something incapable of swerving into his lane, but the tox screen was negative for everything.  We were all confused and thinking about calling in Dr. House or whatever until I heard him talking on the phone while I was walking by the room.
"Huh?  Haha, yeah bro, you know what happened?  So like, I was tweeting, right, and then like BOOM! I like, ran into this pole, yo!  HAHAHA I know, right! Yeah, it's fuckin' crazy man!  So like, hey, do you think you can pick me up from the hospital?  HAHA yeah dude, and like, my nurse, she's pretty hot, I think I'm gonna try and get her number bro.  Ha. Yeah man, Twitter. It's like, so crazy."
Ugh.
The scary part is, I'm sure he operates a condom probably about as well as he operates an automobile, so I'm sure he's out there.  In the gene pool.  Tell your descendants I'm sorry when the world become the movie Idiocracy but in real life.
Posted by hoodnurse at 12:59 AM 12 comments:

No one can do this alone.  At any given point, one of us is going to have more on our plate than we can handle, patient-wise.  My attitude tends to be that I should help whenever I can, because just maybe that favor will be returned when I really need it later.  Plus, the time passes a lot faster when you're working hard.  A couple of people out there tend to abuse this mentality, though.
I distinctly remember the first time it happened to me as a new nurse. I had just been released from my internship at Hood Hospital.  Super awesome preceptor number #2 had instilled in me the importance of teamwork from the first day she worked with me, so when I noticed my partner got an ambulance,  I hopped up to help him start it.  He hopped up, got a cup of coffee, and sat back down at the nurses' station.  At that point, I was already in his room getting report from EMS.  I was utterly shocked and appalled by the whole situation and recounted it to ER BFF in the break room later that night.  She nodded knowingly. "Yup.  Some people like to play that tag you're it game.  Oh! You're in the room?  You're it! Your ambulance now! Nope.  I don't play that shit.  I don't help those people unless they're drowning." And after that day, I became a slightly wiser nurse and learned to let the lazy people screw themselves.
I've pretty already much figured out who is and isn't safe to help out at the new place.  If you're on your iPhone dicking around on Facebook at any point during the shift unless the place is just dead, you're pretty much on your own.  However, I picked up a mid shift the other day to bail out a friend, and they apparently decided to pair the night shift girl with the tag champion.  I've taken report from this guy enough times to know that he's lazy, but I found out that day that he is a special brand of ballsy lazy.  Most run-of-the-mill lazy people will at least make themselves scarce and hide out in the break room or the bathroom by CT or some shit, but ballsy lazy people will straight up stare at you with their feet on the desk and watch you do single-rescuer CPR.
Yeah, well, maybe that's an exaggeration, but only a little bit.  I'm charting when I see an ambulance roll into his room- this patient is obviously FUBAR.  Like, look of impending doom on his face, diaphoretic, pale, no IV, oh, and covered in some really c-diff-y smelling poo just for good measure.  At this point it's about an hour from shift change. I immediately go to work looking for IV access while EMS gives me a report I'm taking down in my head.  I grab a frightened EMT student walking by to start vitals and an EKG.  Monitor shows an OMG WTF looking rhythm, alarms are dinging all over the place, this dude has crap for veins, and demanding family member shows up making demands about us getting the patient water and cleaning up the poo immediately, as if it hasn't been there since yesterday. Tag king walks back and forth several times throughout this fun process, watching the madness unfold. He looks at the monitor, looks down to avoid eye contact with me, and keeps going.  In any other case, I would probably walk out and tell him off, but I was legitimately worried that this patient was going to die.  Luckily for everyone, one of the medics walked by, saw the chaos, grabbed a doctor and we all collectively got the dude somewhat stabilized.
I walk out of the room sweating to find tag king giving report and texting.  I immediately walk back into the room, grab two packs of wipes, drop them on the desk in front of him, and say, "C'mon tag king! I've got your ambulance started, but I'm gonna need some help cleaning him up!"  Homeboy sure did end up staying about 20 minutes after his shift to clean up the c-diff assplosion, too.  I helpfully turned the patient and made sure he didn't miss any spots.  Tag, bitch.
Posted by hoodnurse at 2:47 AM 18 comments:

I feel like a broken record apologizing for being gone so much.  I'm just having a hard time lately.  Work has been shenanigans heavy.  It's frustrating, because on one level it's funny stuff and good blog material, if I was somewhere else in my head.  My eyes are just wide open these days, to the debauchery and the awfulness and the misery of what I do.  Of the sadness of laughing at things that aren't really funny.  I can put on a brave face at work, but at home I stew over what the hell I'm actually doing here.  Most of my coworkers, even the nice ones, have given up on people a long time ago.  I somehow still haven't, and I almost think it makes it harder for me sometimes.  I pray, I push myself to be kind and open-minded, even when my brain and gut are sending me all these signals that I should just put my guard up and shut down.  I'm still getting burned after all this time, but I still don't want to change. In fact, I'm beating myself up about not being better.  About having to think about being nice. Making myself sick over the times that I'm not perfect.
It's basically the same old struggle that I find myself more or less aware of from day to day.  I've always had insanely high standards for everyone around me and even higher standards for myself to the point that I'm usually at least a little bit disappointed. Usually it just means I try incredibly hard and take pleasure in little accomplishments while constantly pushing to do more.  Usually I can see the the good through the ugliness in the world and accept it for what it is.  But occasionally I just get so overwhelmed by it all that it just seems pointless.  How can I be more than a drop in the bucket when everything is already so wrong? I alternate between feeling like part of the problem and feeling so alienated from everyone and everything that I question whether there is anything I can do to help.
I grapple with this every few months at least- teetering between maintaining my borderline unsustainably idealistic worldview and going completely over the edge into frustration and hopelessness.  Taking an honest inventory of myself and questioning whether I really have what it takes to make anything better.  So far adulthood has meant that I don't allow myself to constantly get overwhelmed and saddened by the challenge at hand like I did when I was younger, but the expectations stay the same. With age I've gotten tough enough deal with it, to push the critical narrative out of my head long enough to get things done, but it's still easy to get stuck inside my own head sometimes.
Anyway.  I think and I hope that I will push through the other side of this soon.  I have in the past.  I just wonder now if this is something that I'll always be dealing with, or if at some point I'll start seeing things like everyone else seems to.  I'm really not sure which one I want.
Posted by hoodnurse at 4:17 AM 10 comments:

Yeah, no, I'm not talking about you. Actually, I'm not even technically an RN. I used to be a CNA and I watch lots of shows on Discovery and TLC, I've had 8 kids and I read a lot of stuff about natural remedies on the internet so I think I'm pretty much qualified to be one. I'm currently unemployed so all of these stories are just things I think up when I'm at home during the commercial breaks for Maury.